There are some Second Life features that could have made sense like 10 years ago. However, today they make no sense whatsoever and it’s time to remove them. Let’s face it. Second Life is almost 20 years old and a lot has changed.

And a little bit of disclaimer before the start. When I say nobody uses, I mean that most of the savvy and intelligent people in Second Life hardly use.

The big one for the beginning and I can understand the peeves, the pros and cons of mainland. However, let’s face it … mainland is dumb and few residents use it.

This is what you can see flying around any continent:

My educated guess is that no more (and I’m begin generous) than 5% of mainland has real value for residents.

When you try to break down your costs in Second Life, mainland prices are very expensive compare to the value of it. Linden could easily give away a full mainland region to residents willing to do something nice.

The actual tier levels for mainland prices make no sense. They were a greedy system to take money from residents that couldn’t afford their own estate. Even with the 1024 square meter plot of land for free, prices are too damm high and land valueless.

Second Life Features of the Past: Ban Lines

Ban Lines are so cheesy and one of those Second Life features that belong to the past. The old and original concept had some meaning for privacy.

Since Linden developed a system to prevent residents from peeing others inside the land, the ban lines make no sense at all. Linden could replace them for a simple message on the screen saying: “the privacy settings on this land don’t grant you permission to go in”. End of the story.

A second problem is ban lines height. Everybody should be able to fly over 200 or 300 meters over any plot of land, regardless the privacy settings. It would make Second Life a little more realistic.

Second Life Features of the Past: Gestures

Let me start saying that I would ban all the stupid gestures and the avatars that made them, just to begin with. Gestures are one of those Second Life features that were made to make things a little more automatic and engage socially with other avatars. However they were soon abused by many residents. They quickly turned into something overly histrionic.

Are all gestures silly and stupid ? Probably not, I have seen a few that made me laugh a lot, but when you have most of your social interactions through IM, gestures are not necessary.

The more people in a region, more odds that you start hearing those little voices with a high pitch, that I hate hate and hate.

While Second Life is bleeding residents, losing merchants, regions & adding barriers to newcomers, we still have these features that need to be reworked to make things more appealing. If you think about it, Linden should rework these Second Life features and turn them into something more usable and appealing. There are a lot of things that could be improved inworld and now that Sansar has proven to be a mess and a failure, maybe it’s time to do something serious with Second Life.

If Linden doesn’t feel like improving these features, they should at least remove them and sacrifice a little bit of history, for a little less of shabbiness. It’s may opinion. Perhaps Mainland is not the one to disappear, but it clearly needs a complete redesign. But … this redesign is the point for another article. 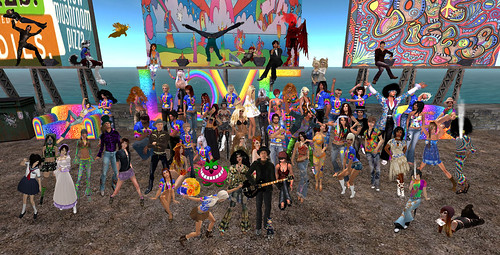