It’s undeniable that Mesh killed Second Life. Everybody thought mesh would be the bread and butter, the last chance, the right move. However, it is more clear than ever that mesh is responsible for the users stampede.

The marketplace is a caos of items with different systems. Clients & Second Life residents can’t figure out what to buy. Instructions are more complicated than ever. Dozens of different systems have winded up irritating everybody.

There has been 2 possible reactions to this bloody mess of mesh items: inactivity or giving up.

Every major improvement in the grid has caused a residents departure. This has been the case for almost 10 years now. It can’t be a coincidence any more. Mesh hasn’t been an exception.

First it was regular mesh, designed for architecture. There was no sign that Linden ever thought of creating rigged mesh. They did, in a clumsy, stupid and most sloppy way possible. Remember those 5 standard mesh sizes? Exactly those that everybody hated. Those that never fit and those that normally required major body adjustments with the alpha to work.

The system was so complicated and difficult to figure it out that many residents left. I can’t blame them. Mistaken or not, they thought Second Life was heading into a much complicated system. They didn’t want to be part of it. And OH! Surprise! They were right in the end.

FitMesh, The Rescue Boat that Sank

Guess what? We bought the new mesh bodies: Maitreya & Slink were the first ones. Only to realize that fimesh wasn’t fitting either. Now we needed a special size for those bodies.

So customers had to buy a mesh body and learn how to make it work. It wasn’t exactly easy … trust me. But they did and eventually they discovered that managing clothing inventory was more complicated. Heck! it was more complicated compared to Second Life viewer 1.0

Whatever happens in Second Life, stays …. it gets more complicated than before. Residents got exhausted after years of dealing with mesh changes. Who can blame them? No doubt, mesh killed Second Life.

What can a confused customer do when dealing with complicated mesh? complicated descriptions? Exactly, they do NOTHING. Mesh looks to them unfathomable.

Why spending Lindens when there is such high risk of not being able to wear those items? So they spend nothing.

The other side of the coin is spending on recommendations. When customers do that, then they realize they have to buy a new body, new head, new ears, new feet, new hair etc. etc. Mesh has killed Second Life cause it turned out into a money pit! and residents are not that stupid! They can tell the difference between improvement and a scam or a con work.

Despite the fact that Mesh clothing looks far more better on avatars than old clothing, they are more difficult to design, create and sell. Now Second Life requires 3D knowledge to create content and not everybody has the skills. The number of creators has dropped because of that.

Above all creators, the ones that have the skills are those that Linden disdained and ignored for years. Maybe they ring a bell, the ones complaining when their items were ripped off and Linden did nothing. Karma is a bitch and the past is here to bite Linden’s ass.

Now that the grid needs them, those designers make more money working for something else. You got to love the irony. You learn 3D for Second Life and you finally end up working for somebody else and making more money.

Please, spare me the Second Life founder hypocrisy when he states in his profile “Yes It is all my fault”. That has been the Linden’s Motto for years. They have always implied that residents and creators are a gang of whiners and spoiled bratty users. Those who were paying them their salaries.

I wonder how you can fuck up so much such a great improvement that creates an stampede. It’s actually too late to ask Lindens to summon their 2 nerve cells left to set up a plan to fix this mesh fiasco. It’s too late because Mesh killed Second Life. Nothing we can do about it at this point. 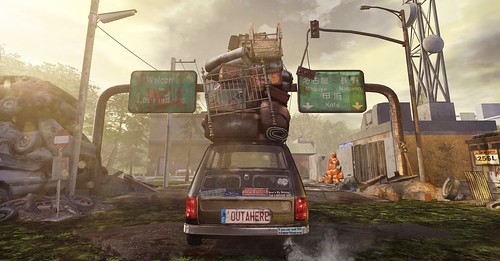 Amigo Uriza is the Cofounder of V-Twins Biker Outfitters in Second Life. These days he no longer runs the store. He is partially retired from the Metaverse